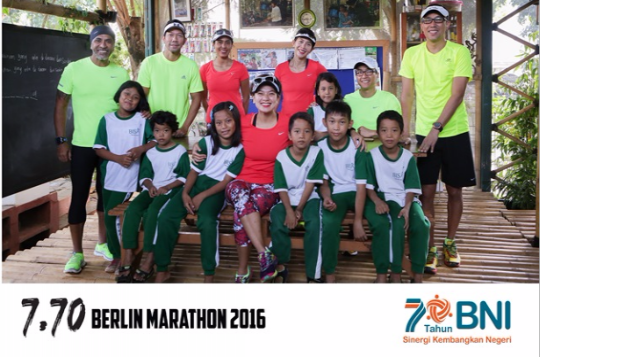 We are a group of friends who live in Bintaro area and have a shared passion for social change and a desire to make meaningful differences in the lives of the often overlooked but plentiful impoverished children.

We plan to take part in this years World Major Marathon in Berlin on September 25th in order to raise funds and bring attention intention to support the education of underprivileged rural children through donations to the Sekolah Bisa! Project.

We are humbled and excited to announce that BNI is supporting 7 Runners to Run the Berlin Marathon and helping us to achieve our fund rising goals.

Sekolah Bisa! is a tiny school with a big vision: To ensure that Indonesian children, born in poverty, can re-fate their lives as productive, responsible and deeply engaged members of society.

Currently, the school serves 25 children age 7 to 12, most living in scavenging communities in the school’s locality, and, until the school was built for them, denied the opportunity to have an education. Now, instead of begging on the street, or scavenging for recyclable plastic, the children attend a school specifically conceptualised to foster their intellectual, emotional and physical well-being in a delightfully green, garden-like setting, in the company of teachers devoted to ensuring each child fulfills his or her aspiration.

Sekolah Bisa is six years old and has a proven record of enabling children to graduate to and progress through secondary school, including one child who has, for the last three years, been top of his cohort, and whose accomplishments were recognised by the Mayor of South Tangerang. Mudi, who used to scavenge for metal is now about to start a three-year accountancy course at High School (SMK): a transformation made possible by a belief in and provision for his abilities.
But now, Sekolah Bisa! is positioning itself to act as a guarantor of every child's future for the next 7 years.

Opened on the 8th April 2011 Sekolah Bisa! is supported by The Body Shop Indonesia, who have donated the land where the school stands in Bintaro area. Sekolah Bisa! and the BIS IB CAS students are supported by CAS students of IB schools in Jakarta: BIS; Bandung International School (BIS) and BINUS, as well as parents, teachers and friends across the world who are sympathize with the plight of Indonesia’s impoverished children and for the greater cause of social justice and an end to inequality.

Conceived & managed by IB CAS students from the British International School Jakarta Indonesia (BIS), they are empowering children through a previously unobtainable education. Without this restitution the children would still be scavenging through refuse for recyclable materials or on the streets begging to survive with little or no access to formal education.

Most of the children enrolled at Sekolah Bisa! live in the Bulakan shanty, close to Pondok Ranji station, Bintaro area (an outer suburb in the south of Jakarta).

Through the continued support of the volunteers and donors the school has continued to remain open and help more children however with annual costs to run this school estimated at around Rp. 70,000,000 we must actively continue to ask for your support to help continue and expand this project.

Our initial objective is to raise Rp.70,000,000 to ensure the continuity of Sekolah Bisa! for one year. However, we were thrilled by overwhelming support from everyone that we hit our fundraising target of Rp. 70,000,000.- in one week!

So raising the stakes even higher, our male runners agreed that if we can hit SEVEN times the target fundraising goal of Rp. 490,000,000.- before 25 September Berlin Marathon deadline, they will SHAVE their HEADS for the race!!!

We hope that we can secure the future for children of Sekolah Bisa! for the next 7 years until 2023 ! And hopefully more to assist in its scaling to help future generations of children in the surrounding area and farther afield.

With these funds, we can offer the underprivileged children a chance to escape from trap of poverty and have the gift so many take for granted, an education and a way out of poverty.

All proceeds from this campaign will all go directly to Sekolah Bisa!

LET’S help make a meaningful difference for underprivileged children and education in our community.

Be assured that funds collected through our dear donors thru this campaign go directly to the project and not to support the operations or expenses of fund raising.

Friends of 7 Runners help with fundraising in any form, donations, sponsorship, volunteering and time, together we will achieve our goals.

Without them, we will never be here. Thank you!